Over 400 people effectively trained thanks to Indian aid project of GROHE and Don Bosco Mondo e.V.

Helping people to help themselves – this concept has been put into action by the GROHE JAL Academy. The training workshop at the Don Bosco Learning Center qualifies young people from extremely poor backgrounds, many of whom have lived in the streets, to become professional plumbers. This gives them the opportunity to start a career as a skilled tradesman and to earn their own livelihood. The project has now won a first prize in the “Innovation competition for professional education projects in developing countries" launched by Germany’s Federal Ministry for Economic Cooperation and Development.

On November 26, the prizes were handed over to the winners by Parliamentary State Secretary Gudrun Kopp at the Berlin Representative Office of Deutsche Gesellschaft für Internationale Zusammenarbeit. Among the winners were not only Grohe AG and its partner, Don Bosco Mondo e.V., but also three projects from the civil society sphere as well as another two projects from Germany’s economy sector. The prize ceremony was also attended by the 5-strong jury, which consists of German theatre and TV actor Dietmar Bär, Walter Scheurle, former member of the Management Board of Deutsche Post AG, Sabine Donner, in charge of the Bertelsmann Transformation Index (BTI), Dr. Stephanie Odenwald, Head of Education and Further Training of Gewerkschaft Erziehung und Wissenschaft (trade union for education and science) as well as Dr. Andreas König, Head of the competence centre for professional education and the labour market of Deutsche Gesellschaft für Internationale Zusammenarbeit (GIZ). The jury singled out projects which support professional education in developing countries in an especially innovative and successful manner and particularly highlighted the creative model of the successful development cooperation between the corporate sector and society in the case of the GROHE JAL Academy of GROHE and Don Bosco Mondo. 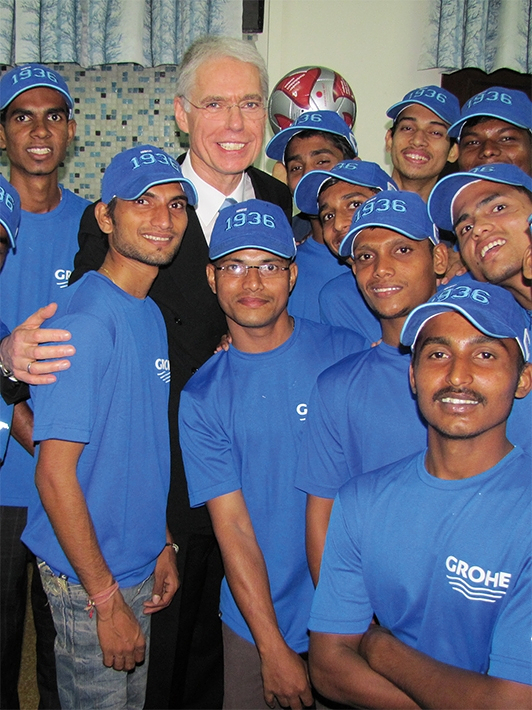 Established at the end of 2009, the GROHE JAL Academy has already achieved great success: by the end of September, as many as 418 apprentices had attended the training workshop, 36 of whom are still enrolled in ongoing courses. Another 40 youths are attending the preparatory course for the plumbing training, with another 100 apprentices about to start their training before the end of the year. This adds up to a total number of roughly 550 successful graduates and current participants.

Says Hans-Jürgen Dörrich, Head of Corporate Cooperation at Don Bosco Mondo e.V., the church organisation sponsoring the Don Bosco Learning Center: “We are very pleased with the achievements of the GROHE JAL Academy. The young people are really interested in the plumbing training courses and their ambitions reflect well in the excellent exam results. Thanks to our direct cooperation with local companies, nearly all apprentices have found a job after the completion of their training. Some have even started higher-level training."

Training in the field of water installation is a two-stage process, i.e. it comprises the basic plumbing training and subsequently the foreman training. According to Indian standards, the qualification measures take between three and twelve months. The degrees are private training certificates issued by the Don Bosco Learning Center. Referring to the GROHE JAL Academy opens up a lot of opportunities for the young graduates. Since 2012, the exams have been carried out in cooperation with Godrij Construction, a large Indian building corporation, which also hires graduates after their exams. The Learning Center has applied for official certification of the training course with India’s national certification authority, which is expected to be granted in early 2013.

“We are very happy that the GROHE JAL Academy project has met with such an excellent response,” says Michael Mager, Head of Human Resources at Grohe AG. “From the very beginning, we found it important to not just make a one-time donation to an aid organisation but to be personally involved. The special advantage of the project is that it not only benefits the young apprentices but that the growing pool of qualified installers will open up further growth opportunities for GROHE in India as well.” 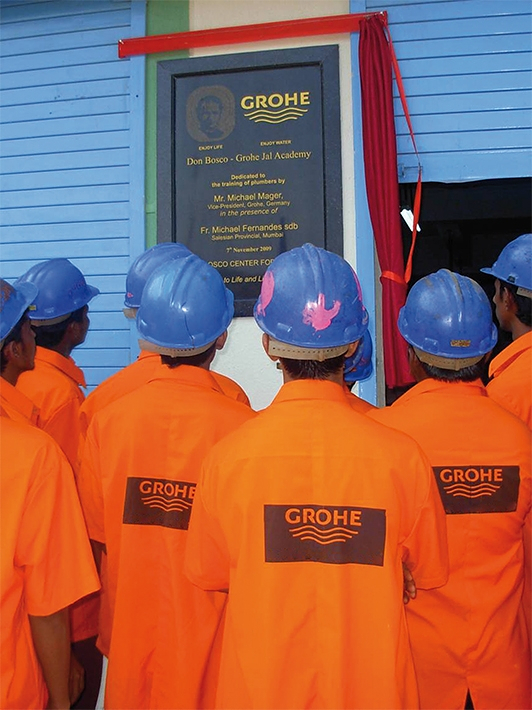 GROHE has equipped the training workshop, installed a sample bathroom and fitted the classrooms in Mumbai with new faucets. Regular visits reveal if and where the company can provide additional support, e.g. in terms of GROHE employees who travel to India during their vacation to pass on their knowledge to the apprentices. At present, demand from interested youths still outstrips the number of available apprenticeships. To change this, it is planned to optimise the use of the classrooms, the workshop and the laboratories through more efficient class scheduling and by working two shifts in the workshop building.

The successful cooperation with GROHE in the field of plumbing training has had another positive effect, as Mahanajar Gas, a partner of British Gas in India, now also cooperates with the Don Bosco Learning Center. The company supports the latter in the fields of gas installation in private homes as well as special welding and installation of gas pipelines.